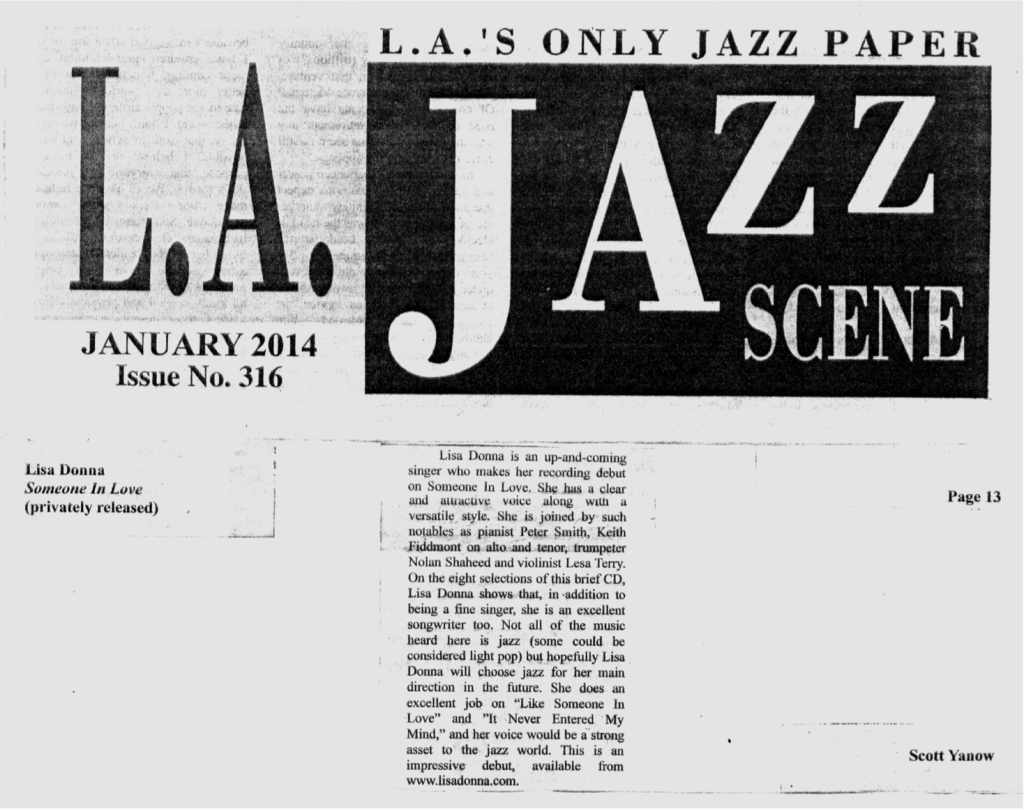 Lisa Donna: Someone In Love

Here’s a debut album by a lady with an attractive delivery, and even better, she writes her own stuff! Lisa Donna teams up with a hip team of Peter Smith/key, Jonathan Flaugher/b, Robert Perkins/dr, Keith Fiddmont/sax, Nolan Shaheed/tp, John Storie/g and Lesa Terry/vio for some contemporary sounding jazz originals along with a couple standards. Her voice has a bit of a country/folksy flavor to it, and she uses it well as when she throws in a “come hither” feel on “Paris in Love” or when she coos on “Sexy Sundae.” Her homey lilt mixes western with jazz licks on “Riding on the Wave” while her take of the dreamy “It Never Entered My Mind” with Shaheed’s solo is delivered with vulnerability. Fresh sounding and willing to please!

From Del Rey with ‘Love’: Singer Lisa Donna serenades the season with a classy Christmas album

From somewhere between the corporate compounds of Coral Tree and the nondescript storefronts along Centinela, a voice rings out clear as a bell from a brunette belle with dark, soulful eyes. The eight tracks on “Someone in Love,” Del Rey singer Lisa Donna’s newly released album of popular contemporary jazz, are mostly originals, with a couple of covers (standards “Like Someone in Love,” “It Never Entered My Mind”) interspersed. As the CD’s title implies, Donna’s musical obsession is primarily the universal topic of romance.

“It shares the love stories of my life,” Donna said of her debut album. A de facto Yuletide record, “Someone in Love” might accompany a crackling fireplace and Vince Guaraldi’s “A Charlie Brown Christmas” as the backdrop for that warm and fuzzy holiday party. Tunes set in Europe feel less European than they do American, even a tinge country. Donna’s “My One and Only Christmas” continues the love theme, while her winking composition “Sexy Sundae” somehow keeps it clean as it gets down and dirty. On the frisky track, Donna coos, as a saxophone blows, lyrics such as “Lickin’ my lips, swaying those hips, so make me, make me a sexy sundae…Eat it all/cherries on top. Eat it all/like it a lot…” yet somehow retains the album’s projection of innocence. “Praise Be Love!” recasts romance as gospel-flavored inspirational, and the countrified opener “Riding on the Wave” celebrates the singer’s joy of life with her husband. “Paris in Love,” its author said, draws from her real-life “whirlwind romance in Europe of my college years, weaving in and out traffic on the back of a BMW sports motorbike, on the Champs Elysee, with the Eifel Tower looming serene.” “Beautiful Sky” was written “up on a hill, looking at the Ponte Vecchio over the Tiber River in Rome,” she said.

Of a Eurasian ethnicity that includes Portuguese, Dutch and Chinese, Donna has been around the musical block but only this month released her very first album. Donna has performed at such Westside venues as Venice’s Witzend and Santa Monica’s The Broad Stage and the Santa Monica Windjammers Yacht Club in Marina del Rey. Donna also sang at the Del Rey Community Do at Glen Alla Park honoring her friend, former City Councilman Bill Rosenthal, as well as at the Crowne Plaza Hotel in Kuala Lumpur, the Landis Hotel Taipei in Taiwan, and the re-opening of the Joy Theater in New Orleans. Most symbolically, she followed the footsteps of her idol, Ella Fitzgerald, and sang at the legendary Apollo Theater in Harlem. In addition to Fitzgerald, Billie Holiday, Sarah Vaughan, Stevie Wonder, Jacques Brel and her mentor, Sheila Jordan, are also among her influences. (Donna credits Jordan for introducing her to her album’s title track.)

But Donna said her fondest memory as a performer came at just six years old, onstage with her mom performing at an officer’s wives fundraising concert in Sarawak, Borneo. As a teenager growing up in Malaysia, she began writing on her Yamaha organ. Her song “Aku Mau Bersama Mu” got her a record deal at age 17. While living in Malaysia, she began singing professionally around Kuala Lumpur venues, won the KDU Freshie Queen Talent Competition (singing Whitney Houston’s “The Greatest Love of All”) and appeared on the Kuala Lumpur Bintang Harapan Nescafe (Malaysia’s version of “Star Search”). She left Asia to attend college on the East Coast before studying vocal performance at Los Angeles Music Academy. A certified yoga instructor who gave birth to a baby boy just five months ago, “Someone in Love” may be her second-favorite creation this year, but singing remains her first love.  Hear excerpts from “Someone in Love” at lisadonna.com/music. Michael@argonautnews.com 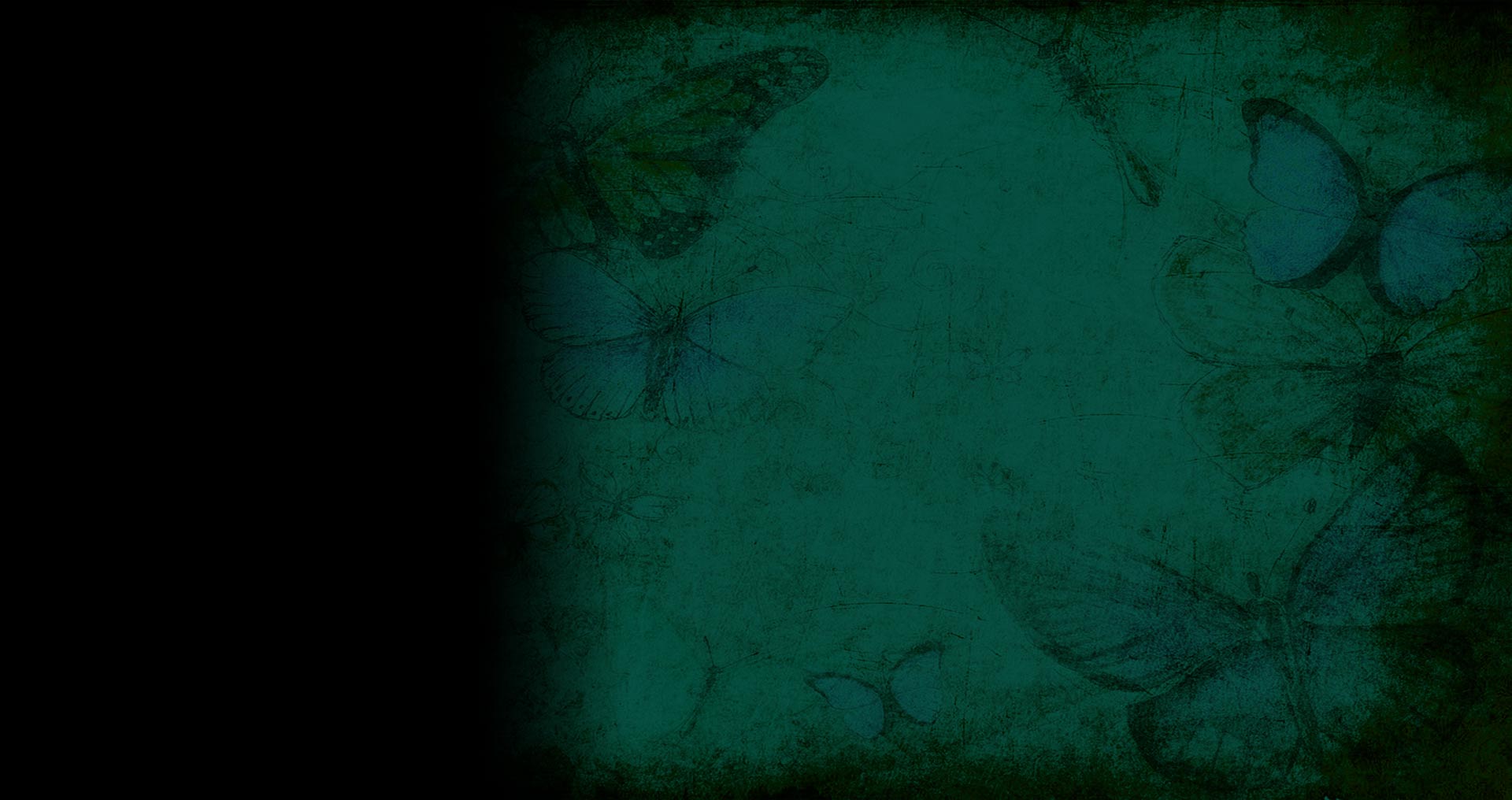